Eric Stonestreet is a talented actor and comedian who’s best known for playing the role of Cameron Tucker in the hit ABC sitcom Modern Family. This American is a cherished actor who has even bagged many awards over the years.

This polished actor has a reputation of taking challenging projects and executing it to sheer perfection. For instance, we can simply prove this fact by looking at his portrayal of Cameron.

Since breaking in the scene since 2001, Stonestreet has constantly delivered nothing but masterful work in front of the camera. It does not matter whether it is on a big screen or a smaller one, Eric will surely entertain you with his impeccable acting skills.

Stonestreet has featured in many notable and high profile projects over the years. Despite cementing his legacy with Modern Family, Eric has also worked in other projects like Bad Teacher, Identity Thief, CSI, and many more.

Continue reading to know more about this accomplished actor. Including Eric Stonestreet Girlfriend, Net Worth, Age, Instagram, Career, and much more.

Eric Allen Stonestreet was born in the Kansas City of Kansas state. He was born to parents Jamey and Vincent Stonestreet. In addition, he even has a beautiful sister named Mauria. His dad Vincent used to run a retails business to support him and his family. 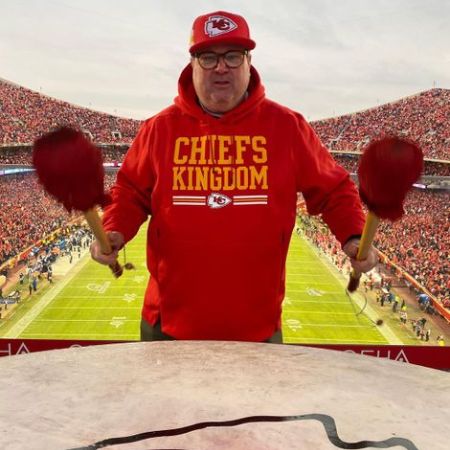 Surprisingly, he wanted to become a clown growing up. By the age of 11, Eric was already performing at birthday parties for 6-7 year olds‘. He even named his clown persona as Fizbo.

All Modern Family fans are pretty familiar with the clown Fizbo, arent we? In addition, yes comically, he even played this character in the show from time to time.

Stonestreet went to Piper High School and Kansas State University to get his educational badges. Similarly, he even graduated in 1996 and has a degree in sociology.

Eric Stonestreet first began taking part in plays during his days at KSU. After that, he studied improv at ImprovOlympic and The Second City Training Center. Similarly, he later moved to LA to pursue an acting career.

This top-drawer on-screen actor has had a very long and distinguished career. He has been acting for over two decades, starting in 1999. Therefore, no wonder we see such crafty and finesse in his on-screen work.

Despite all the great work, Stonestreet is best known for his role in Modern Family. His role as the chirpy gay man Cameron Tucker has touched hearts of all the viewers of the hit sitcom.

In addition, his chemistry in the show with his on-screen partner Jesse Tyler Ferguson and daughter Aubrey Anderson-Emmons is also simply flawless.

However, Modern Family isn’t the only project he has worked in. In addition, Eric Stonestreet has starred and featured in many hit films and TV shows over the years.

Almost Famous, Bad Teacher, Identity Thief, The Loft, and The Secret Life of Pets (1&2) are among some notable movies he’s worked in. Similarly, CSI, ER, Bones, The Mentalist, and Sesame Street are some TV series he’s been a part of over the years.

In addition, Stonestreet even began hosting the hit reality series The Toy Box in 2017. He will even be appearing as a judge for America’s Got Talent after replacing Heidi Klum.

By enjoying and judging his performances as the gay man Cameron Tucker, how can you say he’s not gay, right? However, do not be fooled by it.

Despite his most famous role till now being a gay character, Eric is in fact a straight man. He has even described his sexual orientation as being ‘openly straight’. This just goes on to show what a terrific actor he is.

His on-screen partner and real-life gay man Jesse Tyler Ferguson once even jokingly called Stonestreet as a gay-for-pay’ guy. However, they are very good friends and he even is a supporter of the LGBT movement and community.

Eric Stonestreet girlfriend is Lindsay Schweitzer. Unlike her famous fiance, she isn’t in the show business. In addition, she’s a nurse by profession. They have been together since 2017. Previously, Eric has also been in a relationship with actress Katherine Tokarz.

Apart from this, Stonestreet is someone who enjoys sporting events avidly. He has even driven pace car in many of the NASCAR events. In addition, Eric is also a member of the group that owns the baseball team called Kansas City Royals.

During his time with Modern Family, he along with other cast members were among the most handsomely paid stars in the business. In addition to this, Eric has constantly been busy with many projects over the years.

Due to this reason, this well-established and talented actor has earned a lot of money along with fame and fortune. Eric Stonestreet net worth is estimated to be around a whopping $25 Million dollars. Also, we can only expect him to add to these numbers as he continues to be a part of many other interesting projects as time goes by.

Stonestreet was born on 9th of September, 1971. Eric Stonestreet age is 48 Years. We hope he delights us with his impressive acting for a lot of time to come.

Similarly, he also has a chubby and a handsome build. Eric Stonestreet height is an impressive 1.85 meters. In addition, what’s impressive is that he knows how to use his size and build and use it in his acting work to tell a fascinating story to the viewers.

Sun Apr 19 , 2020
Share on Facebook Tweet it Share on Google Pin it Share it Email Freya Allan, or would you like to call Princess Cirilla of Cintra? Whatever you call her, we are sure that this pretty lady surely caught your attention in the famous series The Witcher. It will come to […]